Rollerstud98 said:
Went to bed at 3-1 and just had a feeling they weren’t going to maintain the lead. Didn’t think they would blow it so spectacularly though.
Click to expand...

I left when it was 3-3, but when it was 3-1 I had this feeling they were done. The Flames can't hold anyone off. Game 4 where they had the lead and lost it with 11 seconds left, reminded me of game two of the Colorado series. They just couldn't get it out of their own end let alone an empty net goal.

Feeling better about the Flames loss now that Dallas won the west and is awaiting a dance partner in the finals. The Flames would have to pay double the salary to land guys like Mony or Johnny, so I expect little changes to the top 6 forwards. The D will have a bit of a shakeup, Gio is 37 now and only has another 2 or 3 years as a top 4 D man.

I'm interested in what Tre's plan is for this offseason. Right now it sounds like the Flames are in on everybody under the sun. I've heard OEL, Kuemper, Markstrom, Holtby, Palmeiri, Lehner, Josh Anderson, Korpisalo, Dumba, Laine, and more.
It would be peak Calgary Flames to have all those rumors swirling just to end up with some underwhelming Jack Johnson trade, lmao

There's no reason to trade Johnny or Mony unless either of them clearly indicate that they won't re-sign, like you said, they're at good cap hits. I honestly don't even think they're the problem. I think we need one more top 6 guy, and then a D revamp. I also find it concerning how little faith our coaching staff (two years in a row now) have had in Rittich as a playoff goalie. And for good reason. He looked bored and slow for the entirety of the return.

Of goalies listed I think i'd be most interested in Lehner or Markstrom ... but I'm honestly fine with bringing back Talbot on another short term deal too. He was excellent in the playoffs.

In terms of forwards, we need more finish. That's been the case for years. I find Laine to be VERY intriguing - just picturing Laine on a line with Gaudreau setting him up makes me salivate. He's rumoured to be pretty unhappy with the Jets org right now, and Jets badly want a top 2 center. Laine would be ridiculously expensive, but oh man. He matured a lot as a player this year (much more consistent and defensively responsible) and he still has the potential to be a perennial 50G scorer.

OEL and Dumba don't intrigue me very much. Too much money for unspectacular numbers. I'd rather we bring in some lowkey guys (DeMelo? Pesce?) and then give Valimaki, Mackey, Kylington, and Kinnvall a chance to play some games.

Im hearing Taylor Hall rumours too, apparently he wants to play in his home city.

More importantly the rumour is we're going back to the retros full time for home and away next year. Regardless if we're good or not, we'll at least look good. Announcement coming October 5 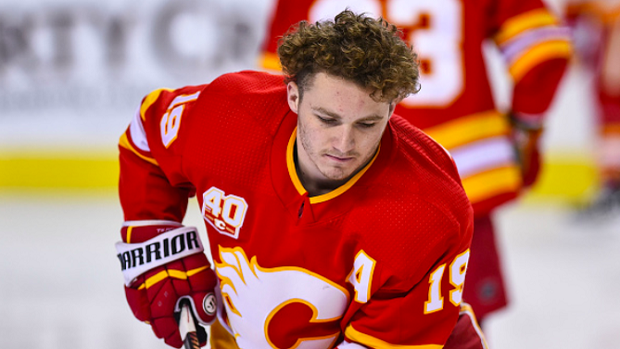